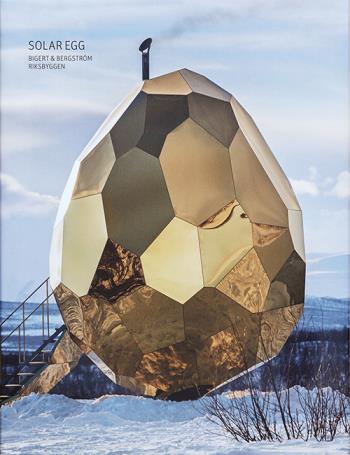 The artist duo Bigert & Bergström have long been interested in producing conceptually and technically complex sculptures and installations with a twist. While their work often touches on serious issues of social and environmental sustainability, (gallows) humor plays an essential part in their practice. The idea for Solar Egg arose from the ongoing geographical repositioning of an entire city Kiruna in northern Sweden. After decades of extensive tunneling the old mining town has to be relocated due to the risk of collapse. When Riksbyggen, one of the developers involved in rebuilding the town, decided to commission a public artwork that would engage the community, the idea of a fully functioning sauna was born. Bigert & Bergström developed Solar Egg as a platform for discussion and a place of reflection. The work has subsequently travelled to art spaces throughout Sweden and abroad. This lavishly illustrated book chronicles the making of the artwork, from rough sketches and blueprints, via studio visits to the tour of the final piece. It includes texts by Sinziana Ravini, Michael Thouber, and Göran Cars, as well as an interview with the artists and Mathias Sandberg from Riksbyggen.

Tigers are not afraid
DVD