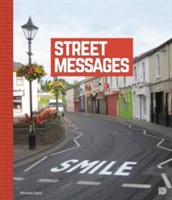 There is plenty of creativity within the international graffiti and street art scene. Writing text messages in public spaces has been a unique art form and a means of communication between humans for over 30,000 years. Many street artists work only with text, written messages or poems, and not necessarily only with colourful murals, styles, tags and logos. Street Messages is the first publication that delivers a deep insight into this literary form of expression in the world of global street art. The streets are full of artistic and poetic forms of expression messages written by graffiti and street artists. Street Messages offers a historic background to written messages in public spaces and introduces more than 80 artists from across the world who work exclusively or partly with text.The vast body of information and numerous exclusive quotes and words of wisdom makes Street Messages the first book to shed some light on this as yet undocumented form of street art culture. Features artwork by Banksy, Dolk, Ben Eine, Faith 47, Flint..., Kid Acne, Know Hope, Mobstr, Skki and many more. Nicholas Ganz aka Keinom is a freelance photographer and author from Essen, Germany. He started to paint in the streets in 1994 and has been documenting graffiti and street art ever since. In 2004, he published his first book, Graffiti World, which became a world-wide best-seller and was trans- lated into 11 languages. In 2006, he released Graffiti Women and went on to write several books about Burma/Myanmar.

All The Light We Cannot See
Bok