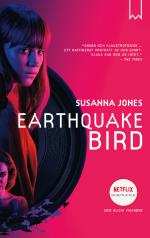 Early this morning, several hours before my arrest, I was woken by an earth tremor. I mention the incident not to suggest that there was a connection. . . for in Tokyo we have a quake like this every month. I am simply relating the sequence of events as it happened. It has been an unusual day and I would hate to forget anything . . .

So begins The Earthquake Bird, a haunting novel set in Japan which reveals a murder on its first page and takes its readers into the mind of the chief suspect, Lucy Fly - a young, vulnerable English girl living and working in Tokyo as a translator. As Lucy is interrogated by the police she reveals her past to the reader, and it is a past which is dangerously ambiguous and compromising . . .

Why did Lucy leave England for the foreign anonymity of Japan ten years before, and what exactly prompted her to sever all links with her family back home? She was the last person to see the murdered girl alive, so why is she not more forthcoming about the circumstances of their last meeting? As Lucy's story unfolds, it emerges that secrets, both past and present, obsess her waking life . . .