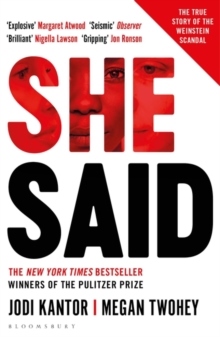 'Explosive' Margaret Atwood'Seismic' Observer'Brilliant' Nigella Lawson'Gripping' Jon RonsonA FINANCIAL TIMES, NEW STATESMAN, DAILY TELEGRAPH, METRO AND ELLE BOOK OF THE YEAROn 5 October 2017, the New York Times published an article by Jodi Kantor and Megan Twohey that helped change the world. Hollywood was talking as never before. Kantor and Twohey outmanoeuvred Harvey Weinstein, his team of defenders and private investigators, convincing some of the most famous women in the world - and some unknown ones - to go on the record.

Three years later, it helped lead to his conviction. This is how they did it.