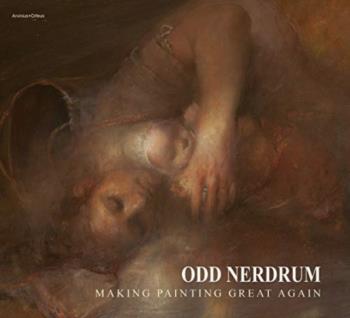 Odd Nerdrum - Making Painting Great Again is a richly illustrated book with texts by philosopher Carl Wegner Korsnes and the artist Odd Nerdrum himself. "Painting as a discipline is ruined; It's time to make painting great again." Thus sounds the masterful painter's philosophy, and these are his appeal points: First and foremost, the painter is a craftsman, in addition, the painter should seek what is always relevant. Nerdrum's idea of making painting great again means reintroducing a quality concept. Again, one should be allowed to say, "I've made something wonderful, and I'm proud of it." It is no coincidence that Aristotle is the thinker who has most influenced the kitsch philosophy. He claims that craft has its utility and value as a means of mediation. Mimesis, or representation, is of value, not only because one finds joy and insight in recognizing a motif, but because one can recreate action in a painting. All human feelings take form in action. Stories that utilize familiar scenes and archetypal situations are, according to Aristotle, of the greatest value, because they are expressions of the universal. Odd Nerdrum gives the discipline of painting back to the people. Art is for the sake of Art. Kitsch, however, is for humans. Removing the intrinsic values of art makes painting a tangible phenomenon again. The feeling of usefulness will return and thus the valuation. Painting is lifted to old heights. Painting is made great again. Carl Wegner Korsnes