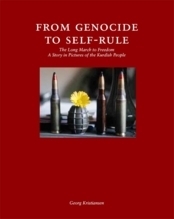 1992 was an important year for the Kurdish people. An autonomous Kurdish republic was established in Iraqi territory and the first free elections were held in Kurdistan. Since then the Kurds have been involved in building their own state based on democratic principles.

Historically the Kurds have been denied their reights as a people and have been targets for the cruel massacres, torture and attempts at extermination. They constitute the largest ethnic population ? approx. 40 million people ? in the world, which is deprived of any political status, despite the fact that Kurdistan geographically is a clearly defined area. Their land is essentially divided politically between Turkey, Iran, Iraq and Syria.

Lately we have seen positive developments even in the Turkish part of Kurdistan. It has become more accepted to talk of the Kurds as a separate ethnic group. A new TV channel started broadcasting in Kurdish in 2009, and at the official launch of the channel Prime Minister Recep Tayyip Erdogan began his speech in Kurdish.

Georg Kristiansen is a photographer. He visited Kurdistan for the first time in 1975, and ever since he has followed the development of the area through his camera lens. He has met survivors from the attacks with chemical weapons in Halabja, he has met Kurds who over and over again have been forced to witness the destruction of their home villages and he has at first hand also experienced their joy of freedom after the liberation from the terror regime of Saddam Hussein.

Georg Kristiansen focuses on the progress of the autonomous region of Kurdistan in Iraq, but he also depicts other parts of Kurdistan. In addition, Jamal Alemdar, the representative for KDP in Europe 1971-1976, and other Kurds have contributed with their own texts.