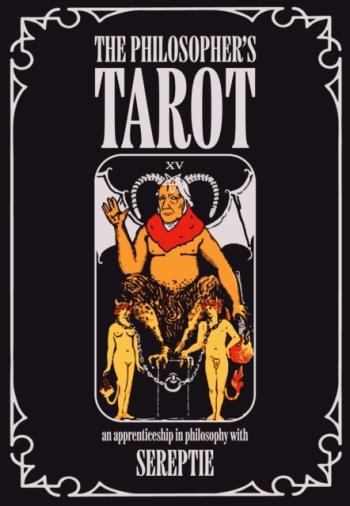 
Let your love of fate go beyond the cardsand as far as the amor fati of Nietzsche! The Philosophers Tarot is chance's tryst with reason: a marriage of philosophy's conceptual creativity with the tarot's path of intuition. Read your spreads in the traditional manner, or delve deeply into the rich philosophical implications that emerge with every draw. While every tarot deck seeks to lift the veil from the forces of the universe, The Philosopher's Tarot does so by gesturing towards the wisdom of history's most notable sages.The Philosopher's Tarot is a tarot deck which infuses the classic 78 card Rider-Waite deck with popular philosophical figures and their theoretical creativity. With added flair and vibrance, The Philosopher's Tarot elicits a mixture of classical interpretations and philosophical inquiry. The deck comprises mashups of the 22 major arcana with famous theorists. The minor arcana has also been reworked to highlight the deck's convergence with philosophical themes. New spreads also engage the tarot's capacity to reveal fresh perspectives to its user whilst invoking stimulating questions about the nature of reality, the machinations of the world we live in, and the limits of our minds and bodies. The Philosopher's Tarot includes new renditions of the traditional 78 tarot cards and a 35-page booklet that briefly introduces the ideas of thinkers featured in the deck.

All About Me!
Bok