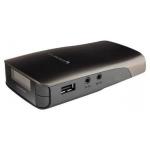 Micro-4/3 mount Speed Booster® adapter designed exclusively for the Panasonic GH4 and other selected Micro Four Thirds cameras (refer to the camera compatbility table in download section), with a magnification of 0.64x. The Speed Booster XL 0.64x uses an advanced 6-element optical design to achieve extraordinary optical performance at apertures up to an incredible f/0.80, a new record for Micro Four Thirds format.

The new Speed Booster XL 0.64x reduces the full-frame crop factor of the Panasonic GH4 from 2.0x to 1.28x, thus effectively transforming these cameras into APS-H format. When the GH4 is used in Cinema 4k video mode the horizontal full frame crop factor is reduced from 2.34x to 1.50x, thus effectively transforming the GH4 into a super-35 format 4k cine camera. In addition, the speed of any attached lens is increased by 11/3 stops, with a maximum output aperture of f/0.80 when an f/1.2 lens is used. For example, a 50mm f/1.2 becomes a 32mm f/0.80, which is the fastest aperture available for full size Micro Four Thirds format.

Compatibility:
The Speed Booster XL 0.64x is similar to the Blackmagic-specific 0.64x BMCC Speed Booster (MB_SPEF-BMCC-BM1), but has been completely re-designed to meet the following requirements:
– The working distance has increased by 1mm to permit use on the Panasonic GH4 and a number of other Micro Four Thirds cameras without touching the flexible outer cover of the camera’s shutter mechanism.
– The optics are optimized for a standard Micro Four Thirds filter stack thickness of 4mm rather than the 2.4mm found in Blackmagic cameras.
– The image circle diameter has been increased to 21.63mm so that the full 17.3mm x 13mm Four Thirds format is covered. This has been achieved while maintaining unusually high image quality over the 17.4mm image circle used by the Panasonic GH4 in its Cinema 4k video mode.

Although the Speed Booster XL 0.64x has extra clearance compared to the 0.64x BMCC Speed Booster, there are still a number of Micro Four Thirds cameras that are not supported due to mechanical clearance issues.

Note:
1 Requires lenses supporting distance information.
2 A third party zoom lens may need to be registered with the Speed Booster/Smart Adapter first in order to detect its maximum aperture.
3 This Smart Adapter is designed to cover an 17.3mm x 13mm sensor.
4 Some improperly-made M42 screw mount adapters may short the electronic contacts of the Smart Adapter and cause damage to the Smart Adapter and/or camera body.
5 Many manual focus lenses (e.g. OM 28/2.8, OM 50/1.8, Leica R 15/3.5) have rear protrusions (spikes, levers, other appendages) which would damage the optics and/or housing of Smart Adapter. They need to be modified before they can be safely used on Smart Adapter. Check and make sure there are no rear protrusions from the adapter/lens combination before using on Smart Adapter. Scratches and damages caused by rear protrusions on Smart Adapter are not covered by warranty.
6 For those passive (without electronic pin or without power supply from the camcorder) MFT camcorders, this Speed Booster Adapter can also be powered by external third-party 5 Volt MicroUSB power supply (third-party 5 Volt MicroUSB power supply is not provided in the box. The compatibility of 3rd party power supply can't be guaranteed)
7 For use with fast lenses (faster than f/1.8), the pre-boost apertures will be displayed in the camera.