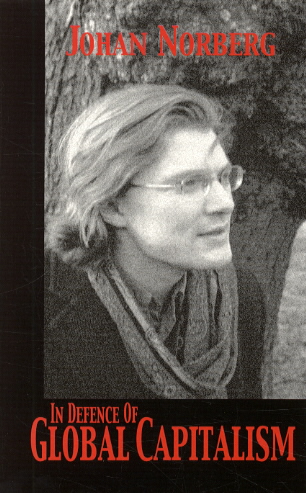 In Defence Of Global Capitalism (Bok)

For some time, opponents of globalisation have been able to spread myths about capitalism. They say that free trade and free markets make the world a more unequal place, that capitalism holds people in poverty, that economic growth harms the environment, that multinational corporations keep wages and labour standards on a low level, and that free financial markets cause crises.

This is not correct. In Defence of Global Capitalism is the book that systematically challenges and refutes the anti-capitalist assumptions. With hard facts, statistics and simple graphs, Johan Norberg explains why capitalism is in the process of creating a better world. But the book is also personally written, with an emphasis on values, and the fact that globalisation gives opportunities and freedom to the world's poor. The book illustrates this with concrete examples of people and countries that have prospered thanks to globalisation, and those that have suffered because of isolation.

Johan Norberg shows that the diffusion of capitalism in the last decades has lowered poverty rates and created opportunities for individuals all over the world. Living standards and life expectancy has risen fast in most places. World hunger, infant mortality and inequality have diminished. This is because of an economic and technological development that is the result of free market policies. The poor countries that have liberalized their economies have shown impressive results, while those that have not are stuck in deep misery. Therefore, we need more capitalism and globalisation if we want a better world, not less.

This is the first book to rebut - systematically and thoroughly - the world picture and tenets of the anti-globalisation movement has been written by a 27-year-old Swede - and former anarchist. It quickly became a bestseller in Sweden after its publication in Maj 2001, and now there is an English version.