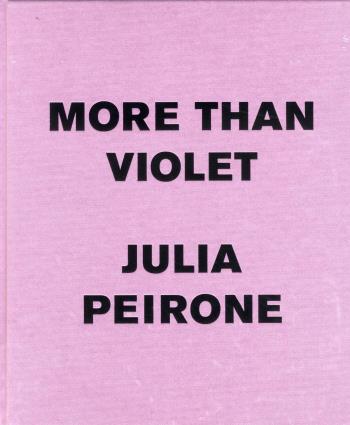 MORE THAN VIOLET JULIA PEIRONE In this age of networked images, identity is increasingly constituted by images, both self-generated and produced by the media. We can experiment and play with our appearances, creating our own image of ourselves. The tradition of studio portrait photography on the other hand, has in general aimed to capture the sitter s best self. In Julia Peirone s intriguing images these two approaches intersect and collide. She shoots hundreds of frames, but eventually only selects the failed and usually discarded ones. Using the studio environment and context she undermines the idea of the photogenic.Technically perfect, but imperfect as portraits in the traditional sense, there is no essence of the portrayed in these images; they defy all conventions of how to conduct oneself before the camera. The viewer s expectations in looking at young girls are also challenged here. Geared up for a studio portrait, long-haired and pale in their shimmering make-up, the girls could be regarded as beautiful, but their supposed beauty eludes the viewer; we are not allowed to get a good look at the girls. Their eyes are half closed, mouths half opened, some are obviously chewing gum indifferent yet aware of the gaze of the viewer, and thus paradoxically, a perfect depiction of teenage girls. Being a teenager is being in the in-between. The book More than Violet contains, beside the portrait series, two other series that interact with the portraits of the young girls. One serie depict images of horizons painted with eyeshadows based on the girls´ makeup and a series of hairbands. Julia Peirone was born in 1973. She lives and works in Stockholm, Sweden. She has had numerous exhibitions in Sweden and abroad. Her work has been published in magazines as Aperture Magazine among others. More than Violet is her second monograph/book.

The Architecture Of Carl Nyrén
Bok