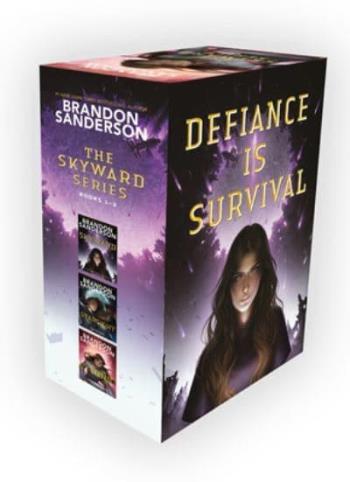 NEW YORK TIMES BESTSELLING SERIES Claim the stars in this new hardcover boxed set featuring the first three books in the Skyward series! From Brandon Sanderson, the hit author behind the Reckoners series, the Mistborn trilogy, and the Stormlight Archive.

Skyward: Spensa's world has been under attack for decades. Now pilots are the heroes of what's left of the human race, and becoming one has always been Spensa's dream. Flight school might be a long shot, but an accidental discovery in a long-forgotten cavern might just provide her with a way to claim the stars.

Starsight: Spensa's made it to the sky, but the truths she learned there were crushing. Everything Spensa has been taught about her world is a lie. But Spensa also discovered a few other things about herself--and she'll travel to the end of the galaxy to save humankind if she needs to.

Cytonic: Spensa has flown through the sky and voyaged past the stars in her quest to save humankind from the forces that threaten to destroy it. But now she must navigate a dangerous new frontier, which not one person has returned from alive: the mysterious realm of the Nowhere. But in a place where nothing is real, the truth can be slippery--and nothing is black and white.