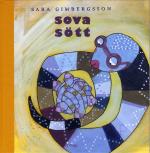 In 1652 the East Indiaman Pelikanen sails from Java to Japan. The Dutch seaman Dirk smuggles his twelve-year-old daughter Liv on board the ship. Liv rides with her father and the Swede Frederick Coyett on the Tokaido road through Japan to attend the Shogun in Edo (Tokyo). He is promoted to be a governor over Formosa (Taiwan). He was attackt by the feared chines japan Koxinga.

The French Kiss - Can Dagarslani
Bok