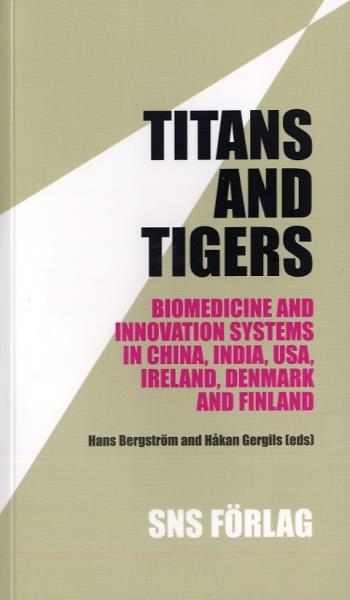 While the US continues to lead the world in research and innovation, China and India are reshaping the global economy. Titans and Tigers gives a thoroughly researched account and assessment of the ongoing dynamics in these three large countries, with a special emphasis on biomedicine. Smaller countries are compelled to respond to the overall course of events. Their success is contingent upon identifying and addressing a myriad of challenges and turning them into opportunities for growth. This demands deliberate and strategic action by their respective governments. The book elucidates the current policies and processes in three small countries where governments and Prime Ministers have acted with particular energy and foresight: Ireland, Denmark and Finland. There are important lessons to be learned for a country like Sweden. Titans and Tigers is published within the framework of the SNS project on competitiveness and the future of the Swedish biomedical sector. The project has been supported by an eminently qualified reference group, led by Mr Michael Sohlman, the Executive Director of the Nobel Foundation. A special grant has been provided by Vinnova, the Swedish Governmental Agency for Innovation Systems. Hans Bergström is an Associate Professor of Political Science and former Editor-in-Chief of Dagens Nyheter. He is a Member of the Board of the Karolinska Institute, as well as a member of the Swedish Government´s Globalization Council and the Royal Swedish Academy of Engineering Sciences. Håkan Gergils is an economist and the Founder of Ecofin, a company that acts as an international advisor to major companies, institutions, governments and the European Commission. He has a unique network and has published several books on the Nordic innovation systems, translated into English and Chinese.