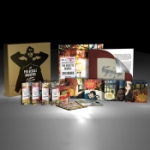 Map Of The Damage (Bok)

London, 1941. Livy makes her way through Blitz-torn London to the Mirrormakers' Club, the only place that makes her feels safe, where she finds herself drawn into the mystery of a missing diamond, and torn between two men with competing claims on her.

London, 1841. Charlotte is helped from the scene of an accident by a man who shows her a building he is working on, and whose kindness unlocks a hope she has long kept buried. But that man is not her husband.

Two women, a century apart, united by one place: the Mirrormakers' Club. A building which holds echoes of past loves and hates, and hides the darkest of secrets in its foundations.