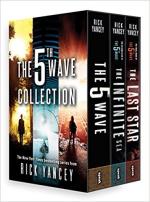 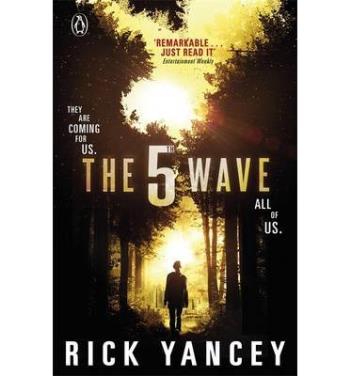 The Passage meets The Hunger Games, The 5th Wave is the bestselling first book in an epic new series from award-winning Rick Yancey. Don't miss the major film of The 5th Wave by Sony Pictures starring Chloe Grace Moretz (If I Stay) - COMING SOON. THE 1st WAVE Took out half a million people. THE 2nd WAVE Put that number to shame. THE 3rd WAVE Lasted a little longer. Twelve weeks ...Four billion dead. IN THE 4th WAVE, You can't trust that people are still people. AND THE 5th WAVE? No one knows. But it's coming. On a lonely stretch of highway, Cassie runs. Runs from the beings that only look human, who have scattered Earth's last survivors. To stay alone is to stay alive, until she meets Evan Walker. Beguiling and mysterious, Evan may be her only hope. Now Cassie must choose: between trust and despair, between defiance and surrender, between life and death. To give up or to get up. DON'T MISS BOOK 2: The Inifite Sea - OUT NOW. "Wildly entertaining...I couldn't turn the pages fast enough". (Justin Cronin, The New York Times Book Review). "The pace is relentless". (Heat). "Chilling". (Sun). "A modern sci-fi masterpiece...". (USA Today). "Nothing short of amazing". (Kirkus (starred review)). "This book's scary!". (Teen Now (5 starred review)). "This is DAMN and WOW territory. Quite simply, one of the best books I've read in years." (Melissa Marr, New York Times bestselling author). "...a twisty survival story that borrows elements from romance, horror and dystopian fiction". (Wall Street Journal). "Breathtakingly fast-paced and original, The 5th Wave is a reading tsunami that grabs hold and won't let go". (Melissa De La Cruz, New York Times bestselling author of the Blue Bloods series). "An epic sci-fi adventure about a terrifying alien invasion. You'll read it in one sitting". (Bookseller). "Heartfelt, violent, paranoid epic, filled with big heroics and bigger surprises ...a sure thing for reviewers and readers alike". (Booklist (starred review)). "A gripping SF trilogy about an Earth decimated by an alien invasion...the question of what it means to be human is at the forefront". (Publishers Weekly). "Borrow this one from your teen's nightstand while they're at school." (People Magazine).

About the author: Rick Yancey is the author of several adult novels and the memoir Confessions of a Tax Collector. His first young-adult novel, The Extraordinary Adventures of Alfred Kropp, was a finalist for the Carnegie Medal. In 2010, his novel, The Monstrumologist, received Michael L. Printz Honor, and the sequel, The Curse of the Wendigo, was a finalist for the Los Angeles Times Book Prize.

The Nobel Prize In Literature - An Introduction
Bok