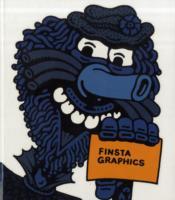 Finsta is one of the most eyecatching illustrators and designers out of the European graffiti scene. For the past ten years his work was spread beyond his native Sweden. Finstas work is an universe of its own, presenting characters, settings and artifacts such as the Finstablaster, enormous ghettoblasters in wood with a painted front cooler than any real boom-box. Finstas graffiti styles are completely unique with with pieces that weave themes that permeate the letters. Many of the letters are actually characters. His paintings, comic strips, street art, graffiti styles and commercial work are all done in the same unique style, influenced by both graffiti lettering, low-brow and comic artists like Robert Crumb and Jim Phillips. But most of all, Finstas work is full of the unexpected. He has the gift to invent new settings, just by adding a little touch. In most part its Finstas humour that plays the main role. A humour that he likes to share. For the first time Finsta is presented by himself. A complete view of a up-coming artist with lots of color illustrations. Earlier presented in books like Los, Dos and Tres Logos, Overground 2 and the Carhartt magazine Rugged.