The Punishment She Deserves 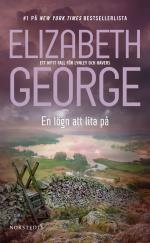 The Punishment She Deserves (Bok)

Award-winning author Elizabeth George delivers another masterpiece of suspense in her Inspector Lynley series: Lynley and his pugnacious and deeply loyal Detective Sergeant Barbara Havers find themselves up against one of the most sinister murder cases they have ever encountered. When a Member of Parliament shows up in the office of the Assistant Commissioner at New Scotland Yard, trouble quickly follows. He is there to request an investigation into the suicide of the son of one of his constituents in the medieval town of Ludlow, who happens to be a wealthy brewer with a team of solicitors ready to file a major lawsuit over the death. The Assistant Commissioner sees two opportunities in this request: the first is to have an MP owing him a favour, and the second is to get rid of Detective Sergeant Barbara Havers, whose career at the Met has been hanging by a thread for quite some time. So he assigns Barbara Havers to the case and partners her not with her regular partner but with the one person who shares his enthusiasm for ridding the Metropolitan Police of Barbara Havers, Detective Chief Superintendent Isabelle Ardery. But Ardery has her own difficulties, the most heartbreaking of which is the loss of her twin sons to a move to New Zealand. She is not happy to be sent away from London and as a result is in a rush to return. This rush causes her to overlook things, important things, and prevents her from uncovering an earlier crime that set everything in motion.

The Punishment She Deserves
Bok