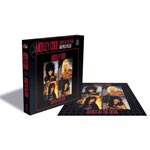 The people of Gettys town believe their cemetery soldier, Nevare Burve, guilty of unspeakable crimes. They also recall beating him to death.

But Nevare didn't die that day. A power far more intractable than an angry mob seized control of his life and swept him away. The magic of the Speck people has claimed Nevare, and is shaping him into a weapon to halt the Gernian expansion into Speck lands.

As his efforts to find a peaceful solution fail, Nevare realizes he can no longer suppress his ruthless Speck self, Soldier's Boy. He is determined to stop the Gernian expansion at all costs, and unlike Nevare, has no sympathy for his spirit-twin's world.

Shout at the devil Puzzle 500 pcs