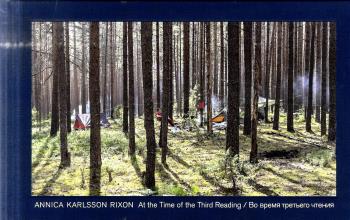 Annica Karlsson Rixon - At The Time Of The Third Reading (Bok)

On June 11, 2013 a federal bill prohibiting minors from being informed about non-traditional sexual relationships was approved after its third reading in the Russian State Duma. Meanwhile, a group of people for whom the new law could have severe consequences arrived at a women´s camp on a remote island. This book comprises a photographic series by Annica Karlsson Rixon depicting the affinity between the women at the camp, but also a sense of underlying threat. Insider perspectives of the situation for queer women in Russia are provided through texts and interviews with activists and academics. Jack Halberstam introduces the text section of the book, and lawyer Dmitri Bartenev outlines the new legislation. Karlsson Rixon is a visual artist and researcher. At the Time of the Third Reading is part of her PhD thesis at the University of Gothenburg, Sweden.