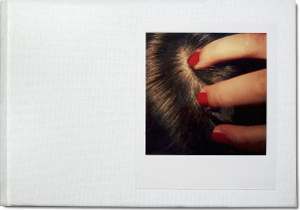 It´s probably a combination of the material and the special way in which colors are rendered that gives Polaroid images their often jewel-like aura. It´s a quality that is there almost independently of what the image depicts, although the motif can further boost this effect in quite a palpable way. This is very much the case when it comes to the series of photography that Bengt-Arne Falk created during a particular period at the beginning of the 1980s. Although Bengt-Arne Falks photography from the early eighties share both an inner relatedness and outer similarities - also marked by the distinctive look of Polaroid material - each image is unique. Partially in the sense that the photographs, just like daguerreotypes, only exist in one physical copy, and partially because the motifs are encapsulated in a way that makes one feel like one is looking into a completely unique and demarcated world. It is a feeling that is not unlike the one felt when confronted with a model or when looking into a doll s house. In Falks photographs the camera lens has more often been pointed at things than people and the objects seem to have been chosen because they convey more than what is visible at first glance. Among them we find a fencing mask, a fountain pen, the black tip of a shoe, a negligee, and a crystal carafe. Objects that reflect a fascination for things as traces, alluring objects that evoke desire of an almost fetishistic nature. It is also about the light and materials, disguises and pleasurable role-playing. Everything is a serious game.