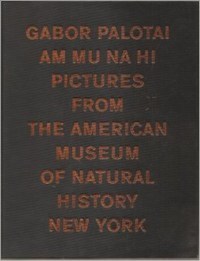 The title AM MU NA HI is an abbreviation, derived from the American Museum of Natural History, situated in New York. Gábor Palotai photographed the stuffed animals at the Museum and then computer manipulated the pictures ? a modus operandi by which they were transformed into allegory. No longer recognized as they were once seen, they became a memento of a death which for them had already occurred.

In Goth We Trust
DVD + CD

Who Stole The I Walkman
CD